We may receive commissions when you buy through links on our site. Learn more.

Women’s cycling is certainly on a growing trajectory and many leading bike brands are starting to pay serious attention to this growing market.

What are the differences between a women specific road bikes to the standard road bikes?

It goes beyond just the frame geometry. We’ve detailed them here.

If you’re in the market for a new women specific road bike, then read on. In recent years, bike manufacturers are releasing women road bikes across the entire pricing spectrum.

These days, you have several good choices depending on your budget and your preferred type of riding.

Whether you’re a beginner or serious road cyclists, here are 12 of the best women’s road bikes you can buy today.

Best for the Budget Minded 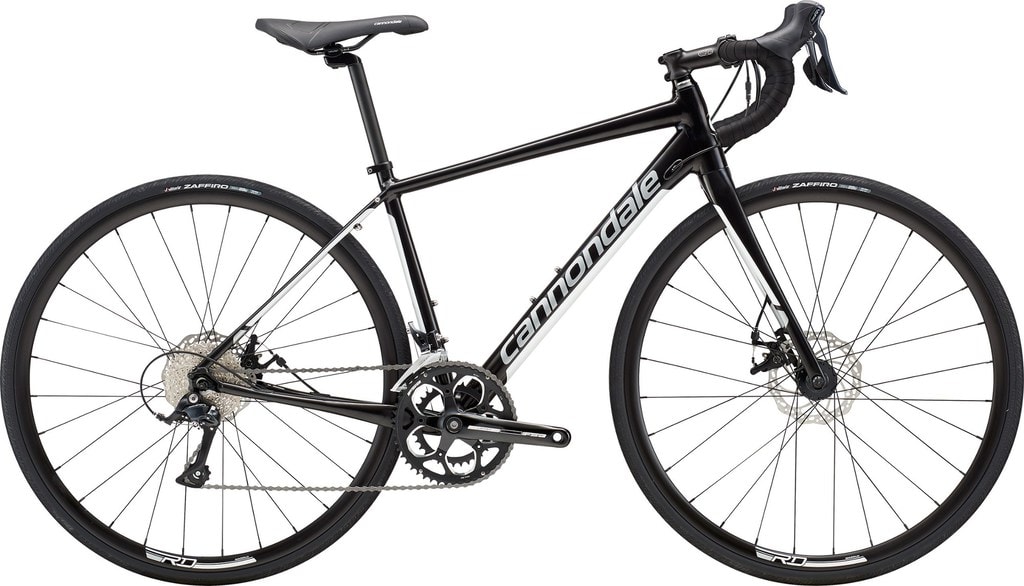 Comfortable yet sporty is what Cannondale offers with its Synapse AL entry-level women’s road bike.

The Synapse’s geometry is designed to offer a comfortable ride for endurance efforts, but is still aerodynamic enough for a road racing feel. A nice add-on at this price point is the carbon fork, which helps dampen road vibrations.

As with other women’s specific bikes, Cannondale fits the Synapse with a 50/34T compact crankset. The 9-speed rear cog set offers a broad range of gears from 11 to 34T. All components are Shimano’s entry-level Sora group.

Keep in mind that Shimano has done away with its thumb shifters with its Sora components, which may not appeal to novice riders. The Synapse also features disc brakes. Other women’s specific features include narrower handlebars and a shorter stem. 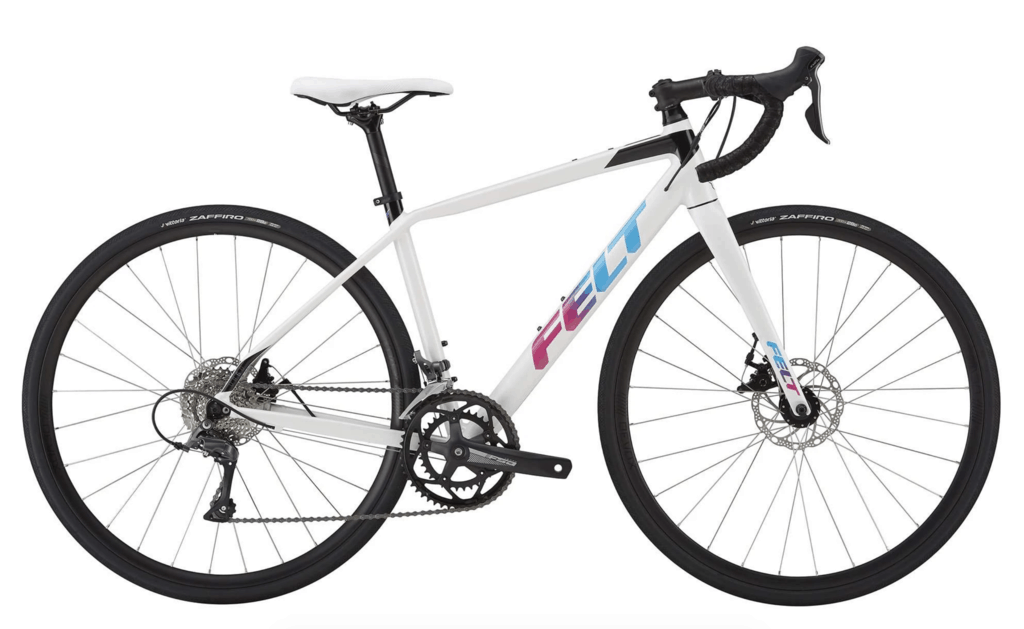 Felt’s VR line of road bikes are designed to take on unpaved surfaces as well as paved road. It succeeds to the Z series endurance bikes, which has been discontinued a few years ago.

With that in mind, the VR focuses on providing comfort with a shorter seat tube, longer seat post, and seat stays that flex more. This geometry also means a higher stack and shorter reach, and thus a more upright riding position.

All of these design features are included in the VR60W, the women’s version of the VR, which really isn’t that much different than the male version. Both have compact gearing with a 50/34T crankset and an 8-speed 12-34T cog set. 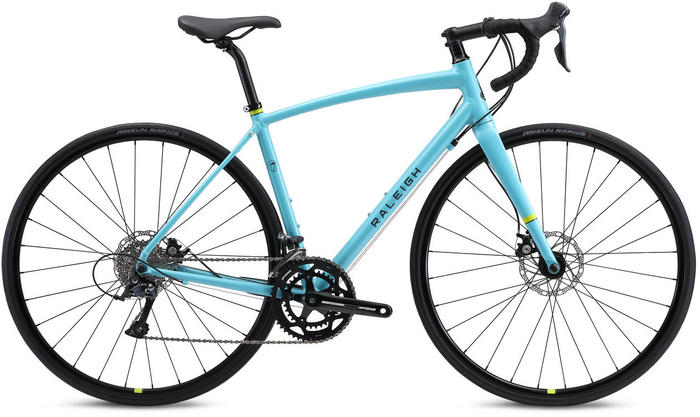 Raleigh offers a number of different features designed to meet the needs of women with this entry-level women’s specific road bike. Most notable with the Revere is the shorter reach in the frame geometry that provides a slightly more upright riding position while still maintaining an aerodynamic position.

The Revere 2 also includes narrower handlebars and a women’s specific saddle. Other features include disc brakes and wider tires for improved stability on non-paved surfaces. 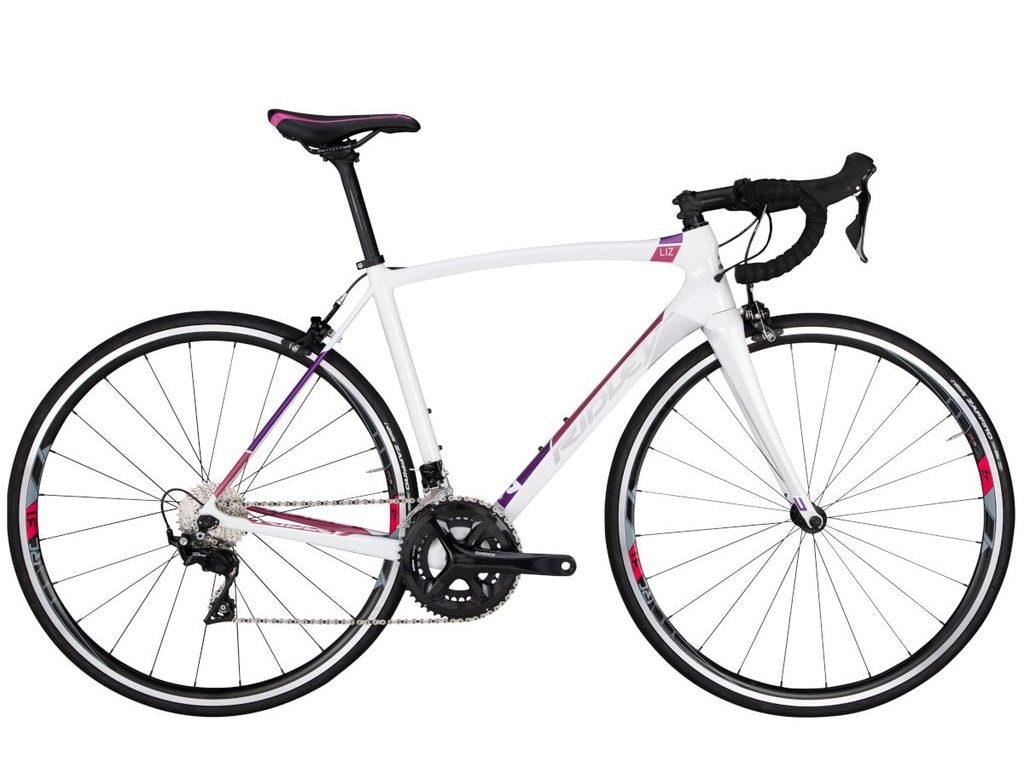 You really can’t go wrong with the Ridley Liz especially if you’ve a little more money to spend on your first road bike.

Ridley is a Belgium-based bike manufacturer that’s been producing bikes since 1997. The Liz SL is the female counterpart to Ridley’s Fenix SL. Unlike other women’s versions of unisex bikes, the Liz SL isn’t a downgrade.

The Liz SL’s frame is built from the same high quality carbon. It also features a full group of Shimano Ultegra components, which is very impressive at this price point. Differences include a shorter top bar to facilitate a shorter reach for women, and a women-specific saddle. 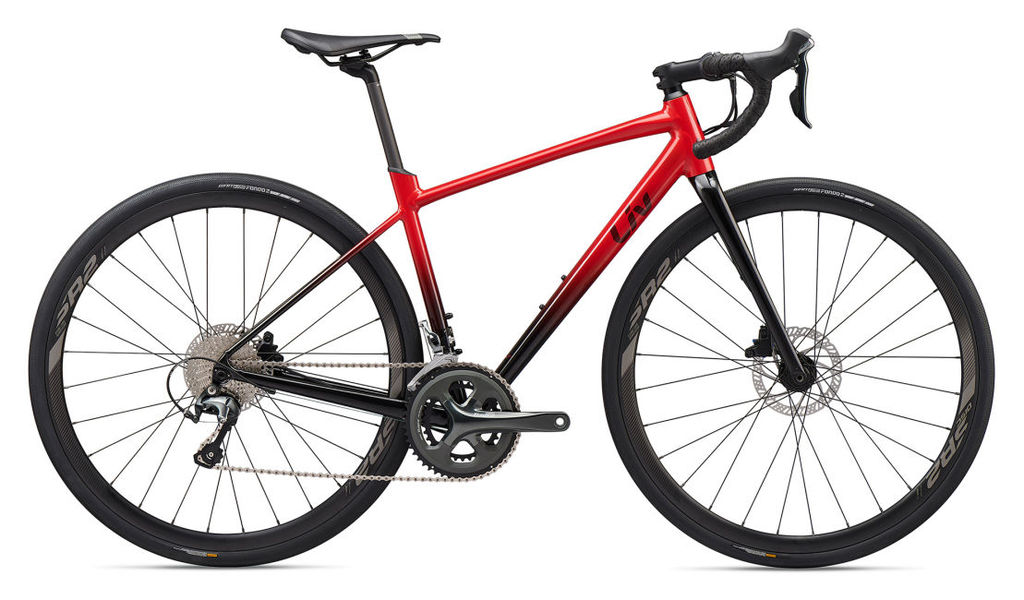 The Liv Avail AR2 is a bike that is at home both on the road and on unpaved paths.

These days, bike manufacturers are looking for more and more ways to design road bikes that allow riders to get off road without sacrificing on road racing performance.

Giant’s Liv Avail AR 2 is a great example of that. Some of the first characteristics you’ll notice about this women’s specific bike is the dropped crossbar, longer seat post, and fatter tires.

The frame geometry and beefier 32mm tubeless tires make the Liv Avail AR2 reminiscent of a cyclocross or mountain bike. However, these off-road design features aren’t so pronounced that the Avail loses its road bike look and feel.

This is a bike that is at home both on the road and on unpaved paths. The Avail’s frame is lightweight aluminum alloy. Components are Shimano’s lower-tier Tiagra group set with a 50/34T compact crankset and 11-34T, 10-speed cog set. 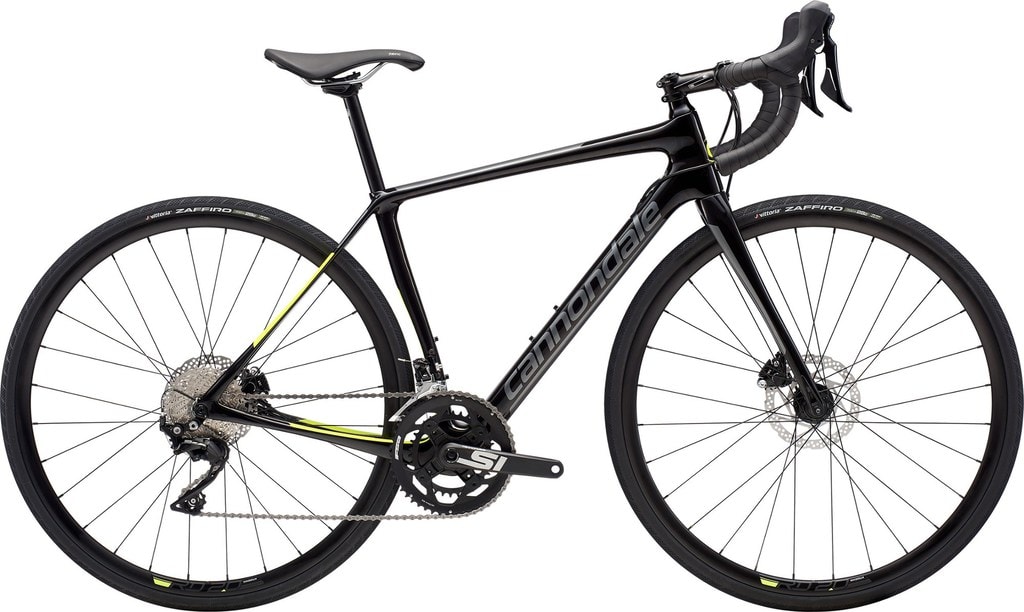 The Cannondale Synapse Disc 105 moves from aluminum frame to full carbon, making for a stiffer ride while significantly lightening the bike’s overall load.

The carbon frame also features Cannondale’s patented micro-suspension in the frame, fork and seatpost, for added comfort. The Synapse does maintain its more upright geometry with this model in keeping with its goal of providing a comfortable endurance bike.

The other notable upgrade is its component group, which jumps from Shimano’s low end 9-speed Sora on the Synapse AL model to Shimano’s mid-tier 11-speed 105 group set. Gearing is identical with the exception of a couple of additional gears in the Disc 105. Disc brakes are also upgraded from cable actuated to hydraulic. 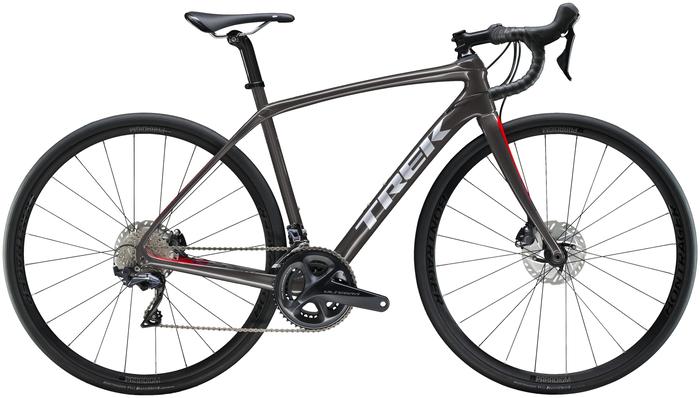 The Trek Domane SL6 is the more budget-friendly model in the entire Domane line, but that’s not to say that there is much you would describe as budget on this bike.

What does that mean?

The Domane’s frame is built with front and rear decouplers that enable the seat tube to decouple from the top tube, allowing the seat tube to flex with the road surface. Adding to this focus on comfort and endurance riding is a slightly higher head tube for a more comfortable upright position.

As with the AR 2, the frame geometry is designed for comfort on endurance rides and stability for different kinds of terrain.

The Avail Advanced 3 keeps the same 32mm road bike tires as the AL2, giving it excellent handling for forays onto moderate off road terrain. 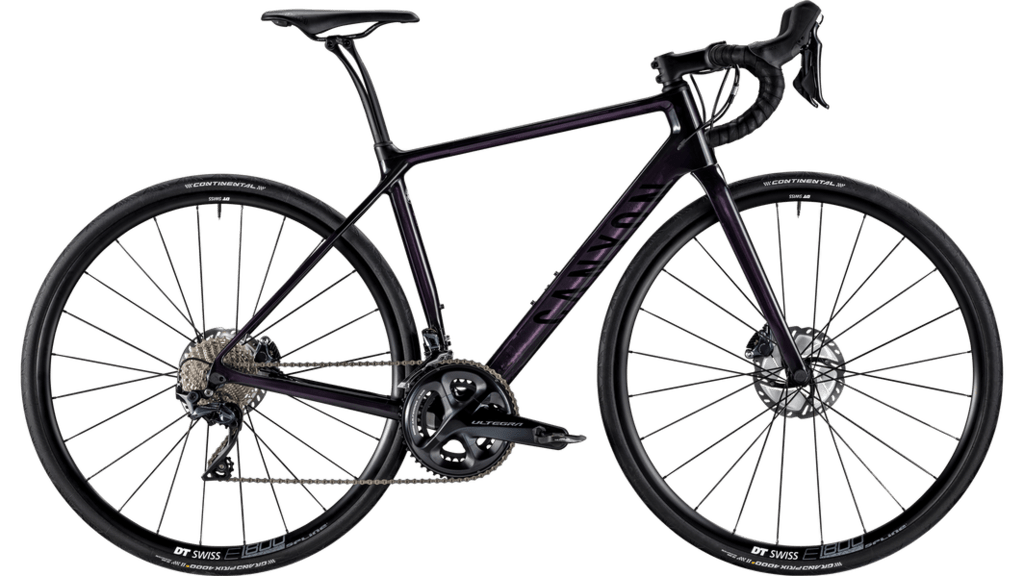 Canyon offers a formidable women’s specific bike with the Endurance Wmn CF SL. This bike is the company’s top of the line women road bike.

Germany-based Canyon bikes began supplying bike parts as Radsport Arnold back in the 1980s. In 2001 the company began producing its own bikes and changed its name to Canyon.

This full carbon bike weighs in at just 8kg, making it one of the lighter bikes at this price point. It also features a full Shimano Ultegra drivetrain with an 11-speed rear cog set that features a broad range of gears from 11-34T.

The Endurance features a smaller cockpit for women with a dropped top tube for a shorter reach. Comfort features include a women’s specific Selle Italia X1 Lady Flow saddle.

When only the best will do, there’s the S-Works Tarmac. This is Specialized’s top of the line racing bike used on the world tour by pro racing teams.

Specialized abandoned its women-specific bikes some years ago in favor of unisex bikes with a broad range of fit. As such, the S-Works Tarmac comes in frame sizes ranging from a tiny 44cm to a massive 61cm, covering heights of 4’8” to 6’5”.

Every feature you’ll find on the S-Works is top of the line, from its ultra light and stiff carbon frame to its full SRAM Red eTAP AXS electronic groupset. The disc wheels are Roval CLX 50 carbon disc. 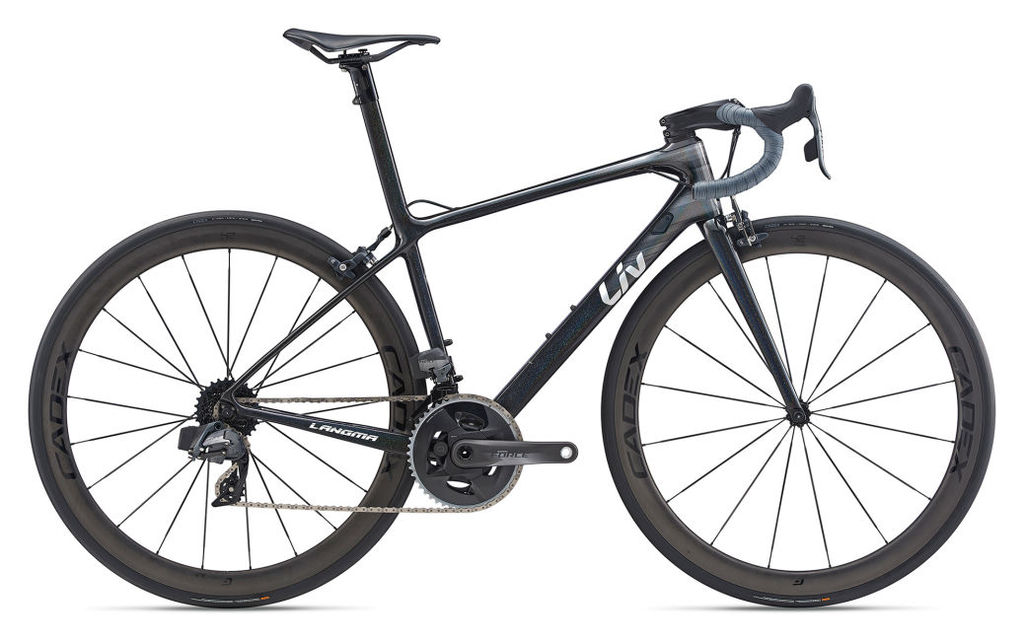 One glance at Giant’s Liv Langma Advanced SL and you know that this is a serious racing bike.

That much is evident by the steep drop from seat to handlebars. A short top tube and almost ridiculously long seat post facilitate a short reach and very aerodynamic position on the bike.

The frame is high quality lightweight carbon while the drivetrain is SRAM’s electronic 12-speed Force eTAP AXS. Force rim brakes round out the Langma’s components. Force is just a notch below SRAM’s highest end RED group.

Gearing is clearly tailored to women with a very compact 48/35T for the chainrings and 10-28T for the cog set. Wheels are lightweight Cadex 42 rims with tubeless tires. The Liv Langma also includes Giant’s integrated RideSense sensors for speed and cadence data. 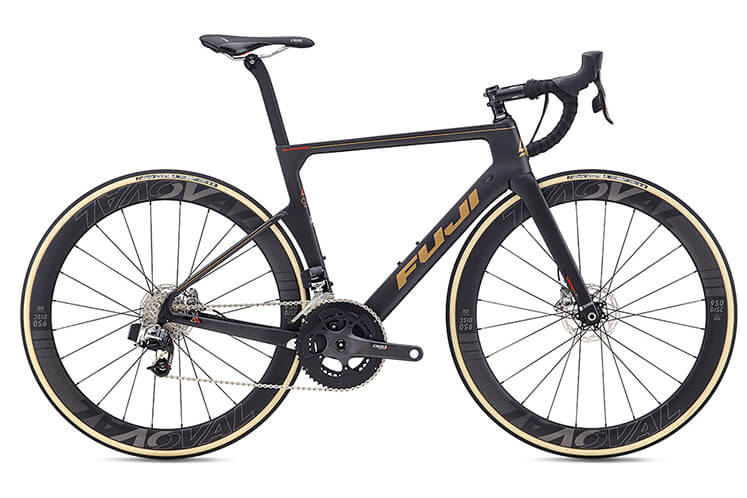 The bike uses Fuji’s top of the line carbon technology for maximum handling and stiffness. You’ll also notice the emphasis placed on aerodynamics in the bike’s narrow seatpost, fork and seatstays.

The Supreme is outfitted with SRAM’s top of the line Red eTap HRD wireless components. Braking is through hydraulic disc brakes. Adding to its aerodynamics are lightweight 50mm carbon rims.

Should you get a women specific road bike?

Are there any differences beyond just the frame sizing and geometry?

Let’s take a deeper look into the differences.

Believe it or not, women’s bikes frame geometry and sizing is a hotly debated topic. For a time, many bike manufacturers made road bikes that were unisex. That all changed in the early 2000s when more and more companies began to realize that bikes designed to fit men weren’t a great fit for women. 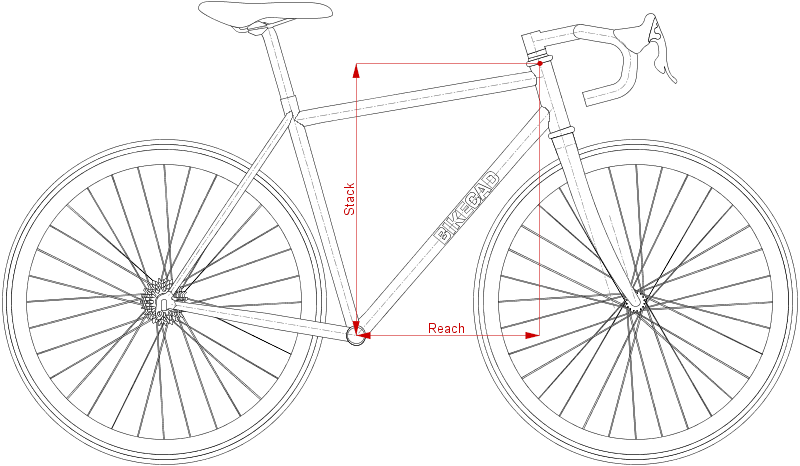 While some manufacturers have stuck with women-specific bike lines, others have cut their women’s specific bikes, opting instead to offer smaller sizes of their unisex road bike frames.

This includes narrower handlebars to accommodate narrower shoulders. Stems are often shorter to tailor to the shorter reach that women have.

Saddles are usually wider to accommodate a women’s anatomy. That said, performance riders will opt for narrower seats that allow for a free pedaling motion. But don’t get too hung up on a saddle when buying a bike. Most manufacturers know that there are a wide variety of preferences when it comes to saddles. It’s the first component that most cyclists will change out after they buy a bike.

Women’s specific bikes will also often have shorter cranks arms, which make pedaling more efficient and less stressful on the knees for riders with shorter legs. Brake levers that feature shorter reaches between handlebar and lever for smaller hands are also common characteristics of women-specific bikes.

With that in mind, it makes sense for gear ratios to be different from men’s bikes to women’s bikes.

Women’s bikes usually have compact crankset (50/34T) with a rear cassette with a wider ratio of gears such as 11-28T or 11-32T. For example, the Cannondale Synapse and Ridley Liz and Raleigh Revere 2 comes with a 50/34T and 11-32T gearing setup.

The Canyon Endurance Wmn CF SL takes things one step further with a 11-34T rear cassette, which is the maximum cassette size a road bike can take.