Recent bike safety statistics showed that 818 cyclists were killed on U.S. roads in 2015.

If you dig deeper into that report, you’ll find that figure represents 2.3% of all traffic fatalities. Simultaneously, cycling ONLY makes up less than 1% of all trips taken in the U.S.

Further to that, an estimated 45,000 cyclists were reported to be injured on the road. The actual is much higher as we all know that many cases were unreported.

Cycling safety has become one of the major concerns on the road in most countries around the world. It’s because there has been a significant increase in the number of disastrous road accidents and crashes involving cyclists.

There’s a high possibility cyclist could get hit while riding their bikes every day.

The local conditions determine the causes of crashes, and it also varies accordingly.

It can be caused by speed, weather, rider visibility, brakes, road condition, automobile and bicycle traffic, distracted driving, driving, and riding under the influence.

Read More : 35 Tips to Stay Safe on the Road

Now that you know, you are afraid and probably saying, “I think I am going to stop cycling.”

Do you think that is the solution?

No! You don’t need to stop.

Here are 11 common ways cyclists get hit and how you can avoid it. 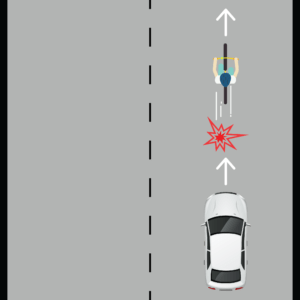 This is a situation where you are riding along the road with the traffic flow, or you innocently ride a little to the left to go around an obstruction such as a parked car and a vehicle runs directly into you from the rear.

Most cyclists fear this the most when they’re out riding but did you know that this makes up only 3.8% of all cyclist collisions?

What Causes You to Be Rear Ended

How to Avoid Being Rear Ended 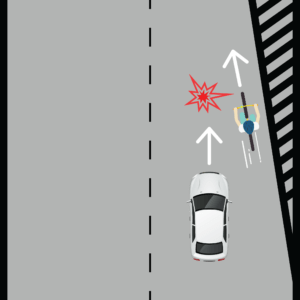 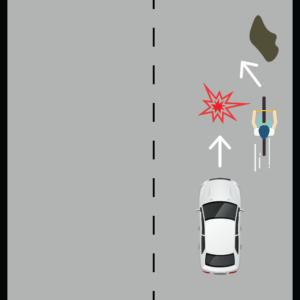 A situation where you decided to change your riding line abruptly due to obstacles in front and the car behind clipped you.

What Causes the SMIDSY Accident

How to Avoid the SMIDSY Accident 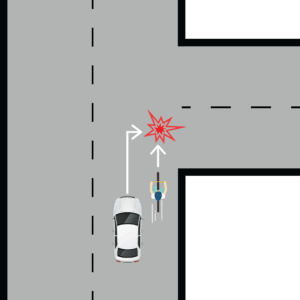 The Right Hook is one of the prevalent situations where cyclists get hit at intersections.

This situation happens when a car makes a right turn in front of you or runs directly into you. The driver might be thinking he would out-speed you because he thinks you are riding a bike and can’t ride faster.

Did you that 89% of cyclists killed or severely injured in New York City happened at intersections?

And 21% of cycling fatalities happened due to vehicles turning?

What Causes the Right Hook

How to Avoid the Right Hook

4. The Other Right Hook 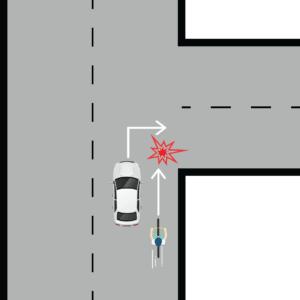 This is a situation where you are riding on the right side next to a slow-moving vehicle, and then it unexpectedly makes a right turn into you. The driver might be trying to enter the driveway, side street, or parking lot.

What Causes the Other Right Hook

How to Avoid the Other Right Hook

5. The Red Lights of Death 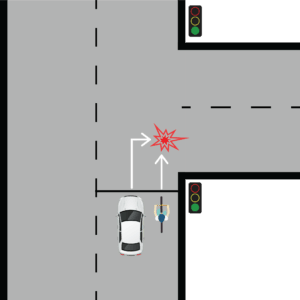 This situation occurs where you stop at the right side of a vehicle that has already stopped at the red lights.

Because you stopped on their right-hand side, the driver might not be able to see you. So when the green light comes up, you move forward while the vehicle turns right and into you.

What Causes the Red Lights of Death

How to Avoid the Red Lights of Death 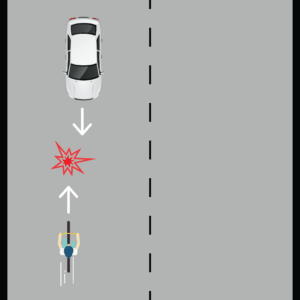 You are cycling on the side of the road or sidewalk against the traffic flow. While this might sound against our basic common sense, it’s still a common occurrence, especially among kids and around built-up areas.

Did you know: Riding in the wrong way is 3 times more dangerous? For children, the risk is 7 times greater.

The driver does not expect you to ride your bike against the flow of traffic. This puts you in a dangerous situation like a head-on collision crash or side hit crash if the vehicle driver turns without seeing you.

Riding against traffic is the most dangerous decision you can make as a cyclist.

Even though you might think it is safer because you will see the vehicle coming in front of your front, you would be confusing the vehicle driver. He will have less chance to know your speed and distance.

Avoid this at all costs. Period.

Let’s assume that you’re riding at 15mph against an oncoming car traveling at 40mph.

What Causes the Wrong Way Wrecker

How to Avoid the Wrong Way Wrecker 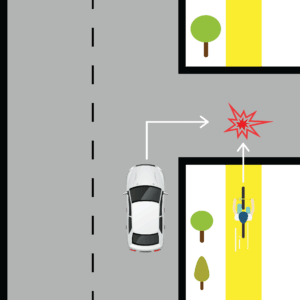 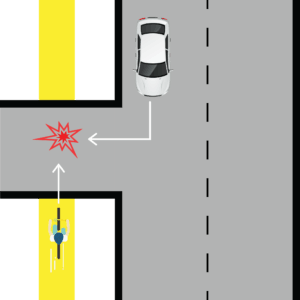 Riding along sidewalks can be dangerous, especially if the sidewalk has furniture such as signboards, seating, trees, bins, etc. along it. This furniture actually limits the driver’s visibility, and they might run into you when they’re turning.

In some parts of the US, like San Francisco, Ohio, Columbus, and New York City, any cyclist older than 13 cannot ride a bicycle on the sidewalk. But this rule does not apply everywhere like Washington, D.C, and Boston.

Many studies like Wachtel & Lewiston 1994 and Aultman-Hall & Adams 1998 have shown that riding on the sidewalk has a higher risk of crashing than depending on the road.

If you’ve no choice but to ride on sidewalks, have a bike bell so that you can alert the pedestrians.

What Causes the Sidewalk Havoc

How to Avoid the Sidewalk Havoc 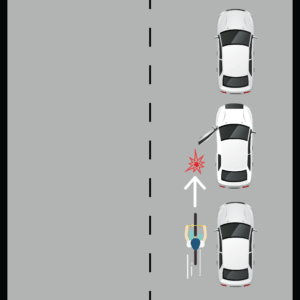 This is probably the number one nightmare for most cyclists. It’s also the third most common bicycle and vehicle collision in Toronto.

In the Netherlands, the children are taught about the Dutch Reach, a technique to open the vehicle’s door using the hand furthest from the handle.

In the U.S., it means opening the driver’s car door with your right hand instead of your left. Try it the next time you drive.

If you are riding in an area where people park cars on one side of the street, there is a high probability that one of the doors get opened anytime. So you should be careful.

What Causes the Door Prize

How to Avoid the Door Prize 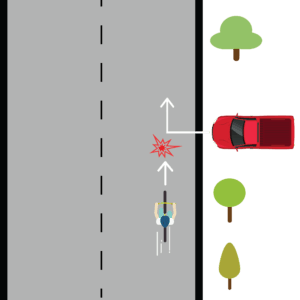 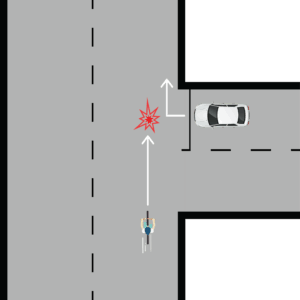 You’re riding straight ahead, and a vehicle pulls out from a street, driveway, or parking lot on your right.

The vehicle could either run into you or miss you by a split second. This is one of the most common ways you can get hit as a cyclist.

There could be 2 possible scenarios here. The car can hit you while coming out of another street, or you can slam into the car if it comes out in front of you.

What Causes the Right Cross

How to Avoid the Right Cross 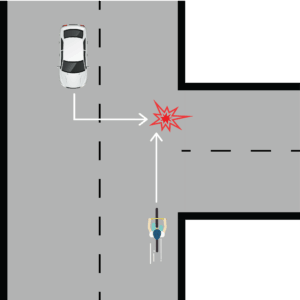 This is similar to The Right Cross. The only difference is that the vehicle is coming from the opposite direction and makes a left turn into you at the intersection.

This situation has happened to the Austin Cycling Association, John Howell, and some other Austin Cyclists such as Janne Osborne and Dr. Lee Chilton.

What Causes the Left Cross

How to Avoid the Left Cross 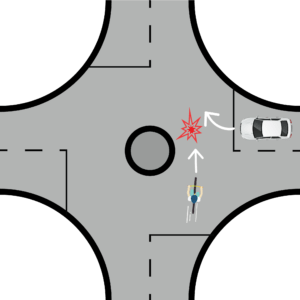 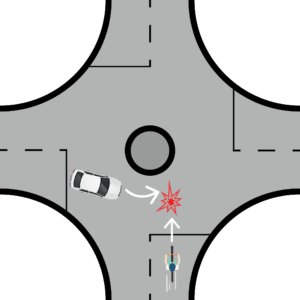 Roundabouts are always a tricky and complicated situation, especially when determining who has the right of way.

The areas in front of the road joining the roundabouts are the danger zone for cyclists.

What Causes the Roundabout Confusion

How to Avoid the Roundabout Confusion

Hisham is a staff writer who has been with us for the past two years. He likes writing about gravel riding, and he’s always looking for new stories to tell our readers. 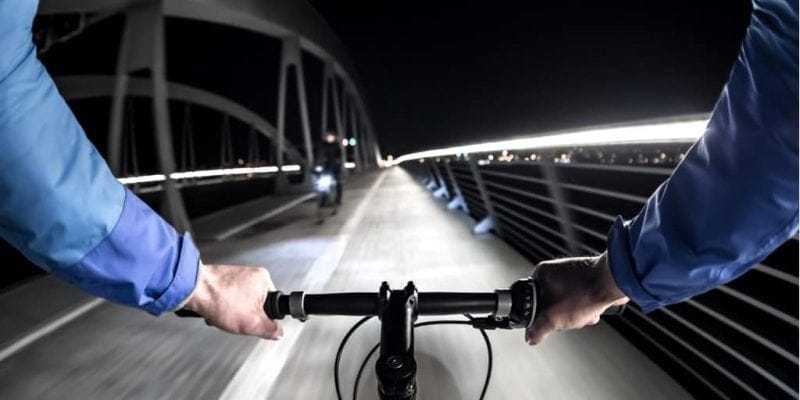 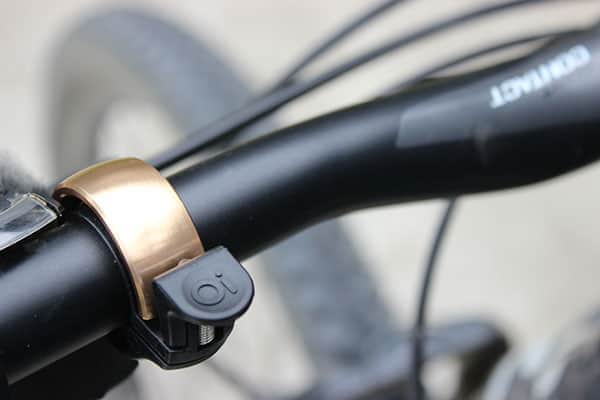 The Best Bike Bells for Road Cyclists in 2021 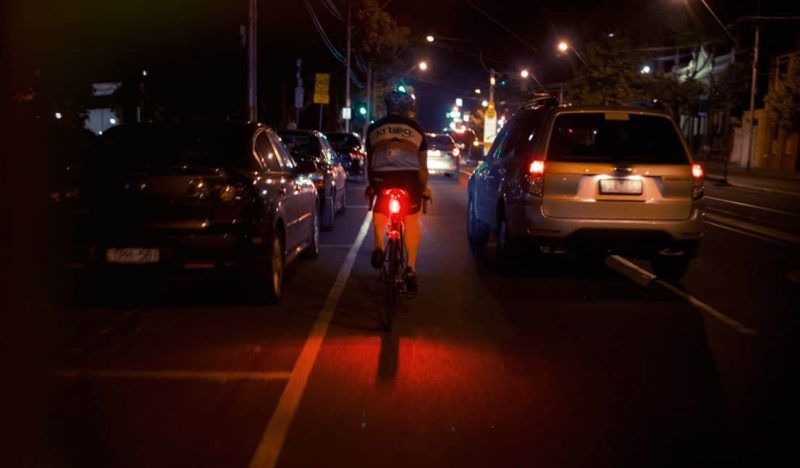 The Best and Brightest Bike Tail Lights to Keep You Visible